Due to the travel ban, you can now own property from your home and get all the documents from your country, stay safe.

Luxury has its name with our new complex, full services and in a strategic location...

Your Office is your pleasure and all your expectations come together in this project...

Nivo project transforms the region with its elegant architecture and adds value to both its life and...

This importance was not coincidental, but many factors combined to make the area where luxury and huge real estate like offices, commercial complexes, hotels and large hotels have been built within the area, which is considered a vital artery in Istanbul, connecting the heart the city with Ataturk International Airport, also the exhibition city adjacent to the airport, as well as the industrial zone, and many important vital facilities.

The Basin Express area also includes a number of financial centers, entertainment centers and service facilities, which has attracted many investors and businessmen.

Recent real estate reports indicate that the average price per square meter in the area ranges between two thousand and five thousand Turkish liras, making it one of the most expensive property prices, not only in Istanbul but throughout Turkey.

The monthly rent for apartments in The Basin Express starts from 2,000 Turkish lira, which makes the investment in the region a very encouraging option.

The growth in the Basin Express has not only reflected in property prices within the area but has also affected the value of properties in the surrounding areas. The Gunsheli district in the famous Bagchilar municipality is a prime example. Property prices have risen, It has also become a new destination for real estate investors, as it is possible to see many of the luxury residential complexes within it.

The right question in this context is why has The Basin Express area has received much attention from investors? The answer to this question is related to several factors. The first is the proximity from Ataturk International Airport, along with the passage of the metro line that will connect the area with the airport, where the availability of transportation is at the top of the factors seen by investors before taking a decision to buy a property in Istanbul, as well as easy access to the exhibition city adjacent to the airport, the industrial zone, and many important vital facilities spread either on or near the Bassin Express Road.

On the other hand, the newly built luxury projects in the area have opened up investor appetite for the investment, given the promising future and the expected opportunities, Some real estate experts call it Maslak 2, following the well-known area of Maslak in Bishktash, which has a large number of skyscrapers and other high-rise buildings. In other words, the Domino effect has taken place in Basin Express, where large projects have attracted larger projects, that has led to a remarkable development of infrastructure

Many big shopping malls are also close to the area, which has resulted in exceptional traffic and vitality, not to mention its proximity to the E-5 road, one of the most important highways in Istanbul.

In recent years, the Basin Express has become a destination for segments of middle- and high-income employees and businesses. Where these segments found in the area what they are looking for, starting from luxury residences enhanced with the latest technology such as smart homes, to the diversity of transportation, with a sense of safety and stability.

The economic factor is one of the most important factors that increase the value of Basin Express, where the area will become in two or three years, one of the largest economic centers on the European side of Istanbul, consequently, this explains the large increase in population, in addition to the abundance of infrastructure projects and public roads, transport, and metro lines.

The third airport, currently being built in Istanbul, the first phase of which will be opened in a few months, is one of the most important pillars of increasing the demand for the Basin Express area. The residential units in the area are the closest to the third airport after Basaksehir district.

"The municipality is constantly working to increase infrastructure and superstructure investments in the region. The municipality is also working on the completion of a 26,000 square meter exhibition and conference city,  equipped to host international exhibitions, as well as many shopping malls, which will make Basin Express a business center. We are also working to increase investment in the hotel industry, and provides all the facilities necessary to bring the huge hotels to the area and increase their number, where the construction of 13 5-star hotels will soon be completed" said the Mayor of Bagchlar, Mr. Luqman Jagerji, who oversees projects in the Basin Express area.

The most favorite cities for foreign investors

The nationalities that owned the most in Turkey 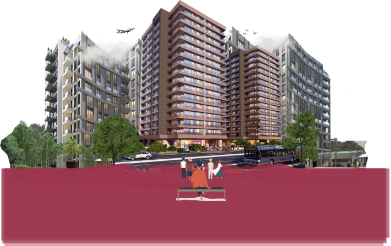